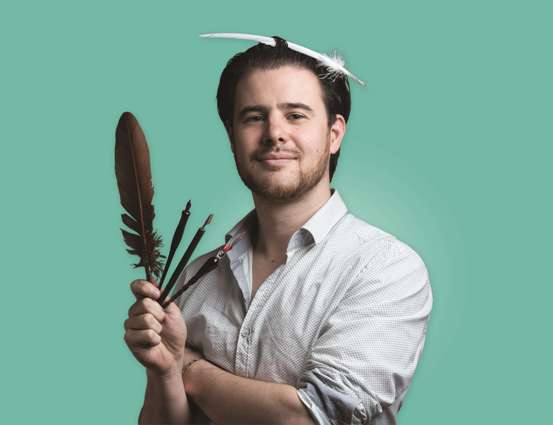 Originally from Loire Atlantique in France, where he studied University Technology in Civil Engineering, Mr Fabien BASTIER had the opportunity to go to Denmark for a year in 2004 to learn English and architecture and to discover Europe.

In 2005, he joined the international curriculum of the Kedge Business School in Toulon, which will allow him to travel to the United States and South America where he will learn Spanish and obtain a degree in business engineering.

In 2010 he became a civil service executive in the South of France, as a master builder, the art of building and renovating. He continued with the maintenance and upkeep of buildings to finally take the head of a team in charge of the overall administrative and technical management of a heritage. Throughout his professional life he has always kept in touch with the pen.

In 2013, he met the professor of Latin calligraphy Anne Sophie DAVOLI who passed on to him her passion for the art of beautiful writing. There followed almost two years of weekly calligraphy lessons, rich in learning, both for the technique but especially for the philosophy that she associates with her art.

In 2017, devoting an unconditional passion for beautiful writing, he decides to create his own company, SAS LUZIA with his wife. The place is a concept store mixing a shop of writing material, craft and design and a calligraphy workshop.

In 2019, and in line with his art therapy skills, developed in parallel with his professional career, he decides to put the art of beautiful writing at the service of people in need (people with physical and/or mental disabilities) through callitherapy and intervenes with the public in health institutions or associations.

It also develops the creation of workshops for children allowing them to give free rein to their imagination and creativity.

He also works with company employees as a trainer, because the practice of calligraphy is above all the art of slowness in a world that is moving ever faster.

Today, it is the magic of his pen that operates, to the delight of all, on a public aged 7 (or less) to 77 (or more), intra muros and beyond, solicited also by the largest luxury brands abroad and in all types of fields (artistic, associative, educational, medical ...).

He is a calligrapher at the service of humanity.